The Triple Crown of Thoroughbred Horse Racing is as rare as finding a needle in a haystack. In order for a horse to complete the Triple Crown, they must win each race - Kentucky Derby, Preakness Stakes and Belmont Stakes - and it hasn't happened since 1978. For most horse racing fans, Triple Crown trivia is nothing more than common knowledge. But, to novice fans, trivia about the sport makes for a fun Triple Crown game idea. Throw a party in honor of the big race and use these trivia questions for your Triple Crown party game. 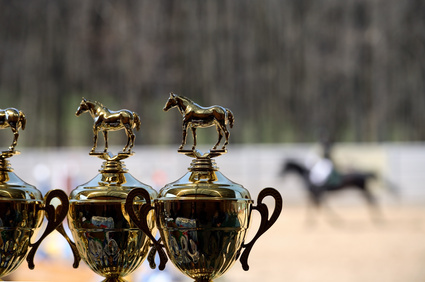 1. Which of the triple Crown races is held on Long Island?

2. Which of the three Triple Crown races (Kentucky Derby, Preakness Stakes, Belmont Stakes) is the oldest?

(The Belmont, first run in 1867, predated the Preakness by six years and the Kentucky Derby by eight)

3. What horse race has the largest attendance in the United States?

4. What year was the series officially recognized?

5. What film was the Triple Crown the primary focus? It starred Diane Lane and John Malkovich.

6. How many horses and jockeys have ever won the Triple Crown?

7. What kind of flowers does the winner of the Belmont Stakes wear?

8. What is the signature drink of the Preakness Stakes?

9. Where did the term, Triple Crown, originate?

10. How old are the horses who compete?

Difficult trivia for Kentucky Derby or other race games:

1. True or false: No jockey has won more than one Triple Crown

(False. Eddie Arcaro is the only rider in history with two Triple Crowns: Whirlaway (1941) and Citation (1948))

2. Which unbeaten colt was the first to sweep the Triple Crown?

3. Which horse came the closest to capturing the Triple Crown in the Belmont Stakes?

4. Secretariat completed his Triple Crown with a 31-length win in the Belmont. What was the previous record?

5. Which Triple Crown winner was owned by the founder of Hertz Rent-a-Car?

6. Which Triple Crown race is run at the shortest distance?

(Monarchos. Some said that he peaked too soon, but showed not as he beat the favorite)

8. What famous racehorse was also known as 'Big Red'?

(Point Given. He would have won the triple crown if he had won the Derby!)

10. What was the name of Affirmed's Triple Crown arch-rival?

Print out the questions for all the guests and be sure to establish some rules. For the harder questions, you may want to suggest working in teams and suggest in your Belmont Stakes trivia party invitation for guests to do their homework. Award prizes to the lucky winner!